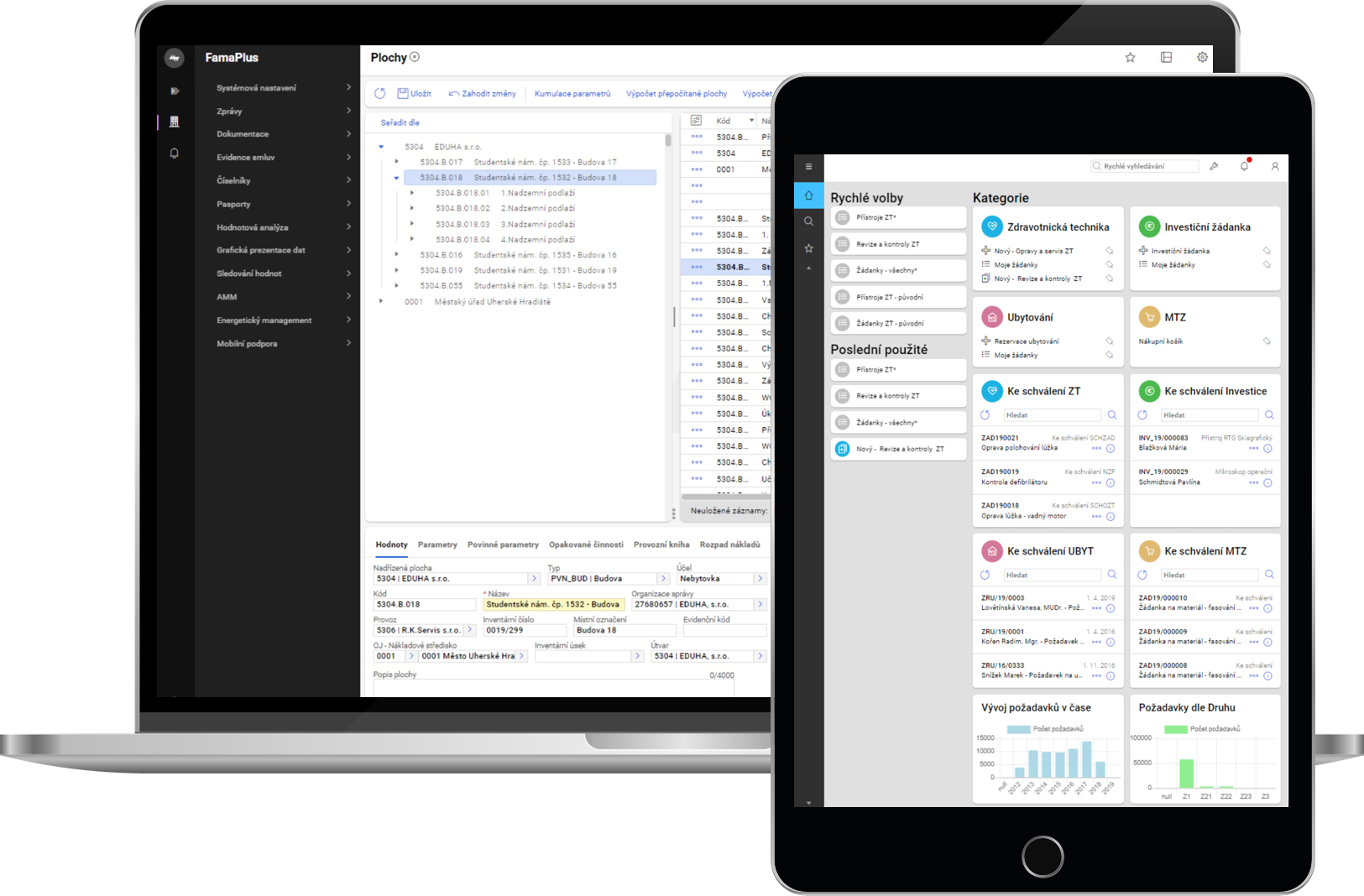 Management of public assets FaMa+ AM

Information System FaMa+ AM provides a comprehensive and coordinated management of the entire asset lifecycle.

It combines economic-financial, technical and proprietary view of the assets with the aim of achieving greater efficiency, cost savings and transparency in its administration.

FaMa+ AM is designed for public administration organizations.

What you cannot measure,

It is used to fully describe the spatial layout of own or managed real estate assets and to display spatial data in graphic presentation.

As an extension of the Spatial records, the Construction records module manages detailed registry of construction and technical elements of the buildings.

Creating variants of individual movements takes place in the graphical view on the data (directly in floor plans) or through changes in the associated descriptive data. In the graphical view, there is an option to colour rooms according to the colouring criteria for individual proposals (variants of moving). One can move the selected workers individually or several at the time.

During the course of moving it is possible to update the moving proposals according to the current state in personnel records (start or termination of employment).

The FaMa+ Facility Management includes a mobile application for reliable and fast identification of assets and its field inventory with the option of electronic identification of barcodes and QR codes including RFID tags.

Identification of assets by entering a unique number, scanning the barcode, or reading the RFID tag of the asset directly in the field.

Each user has only his or her agenda incl. assigned tasks displayed in the application.

Maja provides up-to-date online views of inventory status as well as detailed information about each item.

Data from the application is regularly synchronized on both sides with the central system.

Intuitive searching for assets by inventory numbers, codes, brands of type of asset.

Convenient use of the application even outside the signal and automatic data synchronization.

It is used for entry, implementation and evaluation of maintenance and repair requests by field technicians and effective remote management of work from anywhere.

Fast and comfortable directly in the field using voice commands or QR code.

For a given day and worker, implementation states, monitoring of selected KPIs.

Passport and hierarchy of areas and equipment to the extent necessary for maintenance.

According to defined procedures, including time records, resources and subtasks.

For convenient use of the application even in places without signal, even by voice.

Clear planning of events or recording tasks in one place.

To view only those tasks that the technician is to implement.

Information system supporting prediction, monitoring and evaluation of consumption costs for all energy kinds with the goal to efficiently manage energy resources and gain cost savings.

Modular solutions to ensure comprehensive management of technical and operational support processes in hospitals and other healthcare intitutions.

Robust yet modular solution for managing any IT service.

Solutions for internal and external data and process integration of standalone information systems.

Information system for administering finance and accounting within the organization.